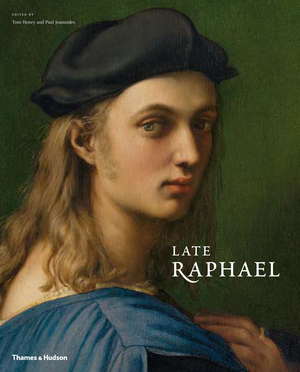 Sublime works of art that provide a deeper knowledge of one of the masters—with Leonardo and Michelangelo—of High Renaissance art, and one of the most important artists in the development of European painting.

Published to accompany a major exhibition at the Museo del Prado, this book focuses on a crucial but hitherto neglected part of Raphael’s oeuvre: the work he and his pupils executed in Rome during the seven years from 1513 to the artist’s death in 1520.

Nearly ninety works—including paintings such as Saint Cecile and Portrait of Baldassere Castiglione, as well as drawings and a tapestry—illustrate the ways in which Raphael employed a range of technical devices, many of which were highly novel and enjoyed considerable influence. Raphael’s workshop methods eventually became a model for the great artistic enterprises of the seventeenth century, notably those of Rubens, Bernini, and Pietro da Cortona.

Essays by Tom Henry, Paul Joannides, Ana González Mozo, and Bruno Martín survey Raphael’s late paintings in chronological order, explore his range of styles, and investigate the role of his workshop in the design and production of his pictures.

Through [Henry and Joannides's] careful sifting of mountainous data …they provide fascinating new insights into this genteel master and the squadron that most contemporaries call his 'boys.'

Biographies of [Raphael's] sitters enrich the book along with beautiful photos, details, and infrared images that show the condition and under painting of key images.

Paul Joannides is an emeritus professor of art history at the University of Cambridge and is a specialist in the painting, sculpture, drawing, and architecture of the Italian Renaissance. His publications include The Drawings of Raphael; Masaccio and Masolino; Titian to 1518: The Assumption of Genius; with Tom Henry, Late Raphael; and with Rick Scorza, The Life of Raphael.