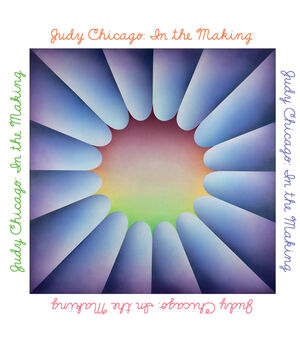 One of the founding forces behind the 1970s feminist art movement, Judy Chicago became widely known for The Dinner Party, a massive installation turning women’s traditional household-bound role on its head by setting a feast for thirty-nine remarkable women to shine a spotlight on women’s contributions to history. Like much of her work that would follow, The Dinner Party received massive popular acclaim while being harshly dismissed for its subject matter and embrace of “feminine” craft. For decades, Chicago operated on the margins of the art world, her work shunned by most critics and institutions, but she never stopped creating. Employing a vast array of mediums from textiles to painting to pyrotechnics Chicago is always willing to tackle the most urgent human questions. Judy Chicago: In the Making accompanies the first exhibition to offer a thorough overview of Chicago’s career. It traces the artist’s practice back to its roots, revealing her unique working process and the origins of the formal and conceptual strategies she has applied throughout her oeuvre. Bringing together a selection drawn from every major series of her work, it also reproduces sketchbooks, journals, and preparatory drawings that document her extensive process of research and development.

Claudia Schmuckli is curator-in-charge of contemporary art and programming at the Fine Arts Museums of San Francisco.

Jenni Sorkin is an associate professor of the History of Art and Architecture at the University of California, Santa Barbara. She writes on the intersections between gender, material culture, and contemporary art, working primarily on women artists and underrepresented media. Her publications include Art in California in Thames & Hudson’s acclaimed World of Art series; Live Form: Women, Ceramics, and Community; Revolution in the Making: Abstract Sculpture by Women, 1947-2016; and numerous essays in journals and exhibition catalogs. She was educated at the School of the Art Institute of Chicago, Bard College, and received her PhD from Yale University. She is a member of the editorial board of the Journal of Modern Craft.

Janna Keegan is assistant curator of contemporary art at the Fine Arts Museums of San Francisco.

Thomas P. Campbell is the director and CEO of the Fine Arts Museums of San Francisco.