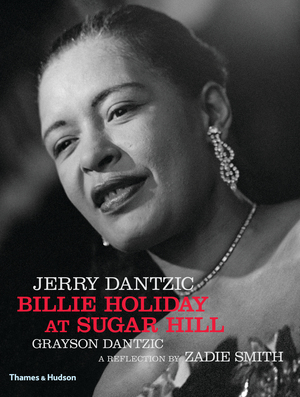 A vivid, intimate, and largely unseen photographic chronicle of one week in the life of jazz icon Billie Holiday

In 1957, New York photojournalist Jerry Dantzic spent time with the iconic singer Billie Holiday during a week-long run of performances at the Newark, New Jersey, nightclub Sugar Hill. The resulting images offer a rare behind-the-scenes glimpse of Billie with her family, friends, and her pet chihuahua, Pepi; playing with her godchild (son of her autobiography’s coauthor, William Dufty); washing dishes at the Duftys’ home; walking the streets of Newark; in her hotel room; waiting backstage or having a drink in front of the stage; and performing. The years and the struggles seem to vanish when she sings; her face lights up. Later that same year, Dantzic photographed her in color at the second New York Jazz Festival at Randall’s Island. Only a handful of the photographs in the book have ever been published. In her text, Zadie Smith evokes Lady Day herself and shows us what she sees as she inhabits these images and reveals what she is thinking.

Billie Holiday at Sugar Hill adds a quiet new dimension to the story we thought we knew about Holiday. With Jerry Dantzic, she revealed homier sides of her life which needed no explanations and invited no judgments: at home with her husband or her dog, or visiting her co-author and her godchild. In these images and in Mr. Dantzic's performance shots, she is not the tragic torch singer of myth but a middle-aged woman finding simple comforts from the maelstrom, no longer as sharp in her voice but undiminished in her ability to command a stage.

This coffee table book features 100 photos and beautifully captures Holiday on a cigarette-hazed bandstand, wearing a bare-shouldered, sequined dress, performing songs such as 'Fine and Mellow,' 'Don't Explain,' and 'Strange Fruit.' Taken one year after the publication of her autobiography, Lady Sings the Blues, and two years before her untimely death at age 44, the photos reveal a deeply personal and vibrant side of Holiday. Also included are…extensive technical photography notes by Jerry Dantzic's son, Grayson, who is a photo archivist [and] a moving essay by novelist Smith.

Dantzic's high-contrast, black-and-white images of the singer on stage are powerful and iconic and reveal an artist truly in her element. Zadie Smith opens this collection with a reflection inspired by the photographs, an evocative stream-of-consciousness prose poem that suggests the mindset of Lady Day.

A sleek coffee table book of photographs, many never seen before, [that] is a reminder that between the fame and the infamy, normal life happens. It's the everyday nature of these black-and-white photographs that makes them so unusual. [Billie] Holiday is pictured walking into the club before a performance; putting on her makeup in front of a dressing room mirror; being licked on the cheek by her Chihuahua; holding her blond-haired godson in her arms; or leaning over a pan in her friend's kitchen. British novelist Zadie Smith, who sang jazz before she began publishing fiction, provides a curious introduction to the book: a short story written from Holiday's point of view.

Recommended for photography enthusiasts, fans of Holiday, and jazz history buffs. Dantzic's intimate portraits honor this period in Holiday' life, just two years before her untimely death at age 44. Often shooting indoors and with a slow shutter, he captures a good deal of motion blur that give the images a gritty look and feel. When Holiday is performing, Dantzic frequently shoots from a low vantage point to emphasize her larger-than-life stature. Dantzic also provides a rare view into the everyday life of this mythic performer, which includes playing with her Chihuahua Pepi, walking in New York City, interacting with friends, and cooking in her West 68th Street apartment.

[A] remarkable set of images of one of America's greatest artists. If you're a Holiday fan, it will be hard to resist seeking out this book that so candidly captures her late in her life and career. The images are intimate but not prurient. Too often fans want to see the flaws, the scars and wear-and-tear of a well-documented difficult life, as if those struggles alone defined Holiday. The book shows us much more. Likely influenced by Dantzic's relationship with William Dufty (her friend and the co-author of her autobiography, Lady Sings the Blues), Holiday gave the photographer nearly unprecedented access.

Jerry Dantzic was a photojournalist whose photographs have appeared in such publications as the New York Times, Life, Look, Vanity Fair, and American Photo. His work is in the permanent collections of the Metropolitan Museum of Art, the Whitney, and the Museum of Modern Art.

Grayson Dantzic, the son of Jerry Dantzic, is a photographer and photo archivist. He edited and wrote the introduction for Jerry Dantzic’s New York: The Fifties in Focus.