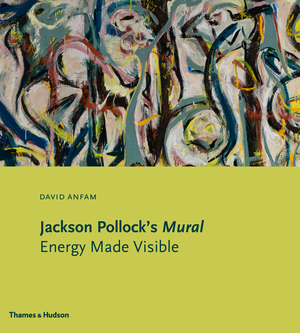 An astute, beautifully illustrated examination of the recently restored touchstone of modern art

Jackson Pollock’s major early work Mural (1943) was commissioned by Peggy Guggenheim for the entrance hall of her East 61st Street New York residence. Mural-sized, though not actually a mural—the work is painted on a six-meter-long canvas, not directly onto the wall—this vast, frieze-like panorama would be hugely influential in twentieth-century American art.

In Jackson Pollock's Mural: Energy Made Visible, David Anfam explores the painting and its impact by way of the different themes it incorporates, including the imagery of action and process, the big picture, the “gothic,” the body, dance, and Romanticism, relating them to art historical precedents, Abstract Expressionism, Pollock’s psychology, and the context of American art and culture in the pre- and postwar years. This analysis is accompanied by reproductions of Pollock’s work as well as imagery from the period that sheds light on the artist’s development.

Gifted to the University of Iowa Museum of Art in 1948, Mural has rarely traveled, and it is now the focus of a traveling exhibition curated by Anfam. This accompanying volume offers crucial analysis and historical background on one of Pollock’s most significant works.

Although a new tranche of recent and forthcoming scholarship is rewriting the story of Mural, David Anfam's vibrant catalogue will almost certainly remain the most assured and sympathetic guide to the painting from conception to legacy. Few interpreters of Abstract Expressionism have Anfam's breadth of cultural knowledge, even fewer his intellectual independence. He avoids theoretical muddle and dead ends. Anfam's prose is as energetic as the painting it elucidates, but both reward close and calm attention.

This passionately argued text by Anfam delves into the personal, cultural, and artistic forces that helped shape Pollock's largest and, according to the author, most influential painting. Richly analytical, and with 106 illustrations including pages from Pollock's sketchbooks, the text draws compelling connections between Pollock's work and the paintings of J.M.W. Turner, the writings of Charles Olson, and the biological examinations of human form by D'Arcy Wentworth Thompson. This insightful study is a welcome analysis of a single work by Pollock.

This handsomely produced book, by one of the most sensitive writers on the New York School of painting, should be on every shelf…Anfam ranges widely throughout Pollock's career, indicating sources within the critical, artistic, social, and political spheres that were deeply influential to Pollock's art from his earliest paintings until his death. There are a number of new finds …that significantly expand the Pollock scholarship and provide new insights into the form of the painter's work and its resonance within its contemporary culture. Compellingly written.

David Anfam is a writer, curator, and leading authority on modern American art. His books include the catalogue raisonné Mark Rothko: The Works on Canvas, which won the 2000 Mitchell Prize for the History of Art, and Jackson Pollock’s Mural: Energy Made Visible.