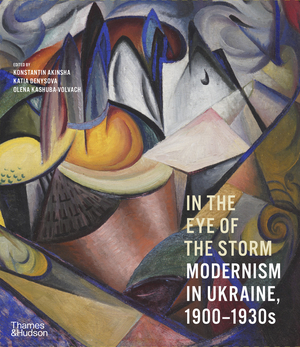 In the Eye of the Storm: Modernism in Ukraine, 1900–1930s presents the groundbreaking art produced in Ukraine in the early 20th century. The book accompanies an exhibition that traces Ukrainian artistic developments between 1900 and the 1930s in three key cultural centers— Kharkiv, Kyiv, and Odesa—against a complicated socio-political backdrop of collapsing empires, World War I, the Revolution of 1917, and the creation of Soviet Ukraine.

Showcasing avant-garde art and the Ukrainian artists who made it, while acknowledging the complex geopolitical structures and identities within which it functioned, In the Eye of the Storm features works in various media, from traditional oil paintings and drawings to collages, graphic and theater designs, and cinema. Exploring the distinctive voice of Ukrainian artists in the early 20th century, this is a relevant and important publication that reveals Ukraine’s significant contribution to modern art.

Konstantin Akinsha is an art historian and curator. He has been a contributing editor for ARTnews magazine, New York. Among his numerous journalistic awards is the George Polk Award for cultural reporting (1991). From 1998 to 2000 he served as a deputy director of the Art section in the Presidential Advisory Commission on Holocaust Assets in the US. Among exhibitions curated by him are “Silver Age: Russian Art in Vienna around 1900” (Galerie Belvedere, Vienna, 2014), “Russian Modernism: Cross-Currents of German and Russian Art, 1907–1917” (Neue Galerie, New York, 2015), and “Permanent Revolution. Ukrainian Art Today” (Ludwig Museum, Budapest, 2018). He is a founding director of the Avant-Garde Art Research Project (UK) and the author of a number of books, including Beautiful Loot.