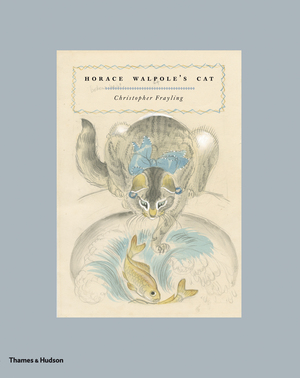 The tragic death of Walpole's cat and the Thomas Gray poem written in her honor: the true story of what happened, and a look at the lively social and cultural scene in the eighteenth century.

This delightful compendium focuses on one of the best-loved poems in the English language, but in the process it takes the reader on an engaging romp through the literary, intellectual, and cultural world of the eighteenth century. It brings alive a host of engaging characters: Horace Walpole himself (one of the great letter writers of all time, wit, raconteur; the curmudgeonly Dr. Johnson (who nevertheless had “a very fine cat indeed”) and his sometimes recalcitrant biographer James Boswell; and a cast of “handsome cats,” including Selima and Zama.

In February 1747, Selima the tabby fell into a Chinese blue and white porcelain tub in Walpole’s house in London’s Mayfair and never returned to dry land. The poem by Thomas Gray, “Ode on the Death of a Favourite Cat, Drowned in a Tub of Gold-fishes,” was written as her mock epitaph.

Here is the true history of the event, and a look at the sparkling social and cultural life of the period. It is beautifully illustrated with Richard Bentley’s original series of designs for the poem, William Blake’s wonderful watercolors of some fifty years later, and the unpublished color illustrations produced in the 1940s by the noted children’s book illustrator Kathleen Hale, of Orlando the Marmalade Cat fame.

Frayling's essays add scholarly gravity balanced with a true love of the literature of Walpole, Gray, Johnson, and their contemporaries. Each set of illustrations emphasizes different aspects of the brief, clever, and charming poem with whimsical drawings and lively characterizations.

Charmingly illustrated history of one of the best-loved and best-titled poems.