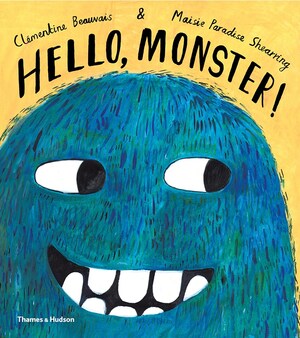 A whimsical story about childhood imagination and the freedom to be oneself.

Parents always tell their children to go play with other children on the playground. When the mother in Hello, Monster! tells her son to join another boy in the sandbox while he is happily playing by himself, he rebels. His mother never talks to strangers, and what if the other boy is a monster disguised as a child that will trap him in his underground kingdom with all the other children who cook his meals and look after his pet moles?

The boy hatches a plan for all of them to escape, but when they do, they encounter a black panther. Luckily, the panther prefers to eat monsters over children, and after his dinner, he tells the children stories of the jungle until five in the morning. The children watch the sun rise as they return home to their worried parents, who feel guilty and let them stay home and eat cake all day, never telling them to “go play with that boy” ever again.

With lively and whimsical illustrations, Hello, Monster! is a creative story about respect for the imagination, solitude, and children’s inner worlds.

Clémentine Beauvais is a lecturer in English and education at the University of York. She is the author of more than fifteen children’s books.

Maisie Paradise Shearring is an illustrator. She is the recipient of the Bologna Children’s Book Fair International Award for Illustration 2015.