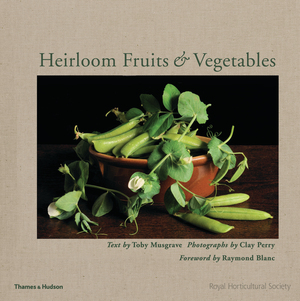 A celebration of the beauty and rich history of heirloom varieties of fruits and vegetables.

Fruits and vegetables have been a central part of our diets since time immemorial, and the history of their cultivation is rich with intriguing facts: Samuel Pepys’s diary entry for August 22, 1663, reveals that “Mr Newburne is dead of eating Cowcoumbers” (cucumbers); many tomato varieties were first bred in the United States and are still available, from“Striped German” to “Pink Ping Pong” to “Zapotec.”

Today, numerous traditional fruit and vegetable varieties—the so-called heirloom or heritage varieties—-are disappearing, a catastrophic loss of horticultural heritage and genetic diversity. But gardeners have reason to be optimistic. A group of dedicated growers around the world is seeking to conserve surviving heritage varieties for their significant advantages over newer cultivars: they are more adaptable, they have good storage properties, and they often have a superior taste.

Presented by season, this overview first tells the story of the cultivation of fruits and vegetables through the ages, and then each type is discussed: where it originated, indigenous uses and folklore, how it got its name, legends and beliefs that have become attached to it, and the odd uses to which it has been put.

[Perry's] photographs are masterly romances, accompanied by an intelligent text by Toby Musgrave.

With luscious photos and illuminating text, this book is a masterful presentation of the heritage of the fruits and vegetables we have cultivated …

Toby Musgrave is a leading authority on garden history and design. He lives in Denmark.

English photographer Clay Perry‘s work has appeared in World of Interiors and Country Living and in more than a dozen books.