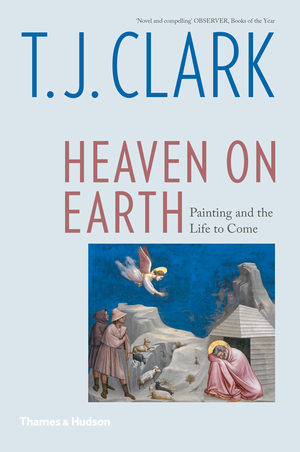 Preeminent art historian T.J. Clark explores how painters since the Middle Ages have portrayed the divine on earth.

In this latest work, now available in paperback, respected art historian T.J. Clark sets out to investigate the different ways painters have depicted the dream of God’s kingdom come: heaven descended to earth.

Clark goes back to the late Middle Ages and Renaissance—to Giotto in Padua; Pieter Bruegel facing the horrors of religious war; Nicolas Poussin painting the Sacraments; and Paolo Veronese unfolding the human comedy, in particular his inscrutable Allegory of Love. Was it ultimately to painting’s advantage that in an age of orthodoxy and enforced censorship—threats of hellfire, burnings at the stake—artists found ways to reflect on the powers and limitations of religion without putting their thoughts into words? Clark takes the reader on a journey starting in the Middle Ages to the nuclear age with Pablo Picasso’s Fall of Icarus, made for UNESCO in 1958, where Picasso powerfully pictures art in an age when all futures are dead.

T.J. Clark is Professor Emeritus of the History of Art at the University of California, Berkeley. He is the author of many books including the seminal The Painting of Modern Life: Paris in the Art of Manet and His Followers and Farewell to an Idea: Episodes from a History of Modernism.