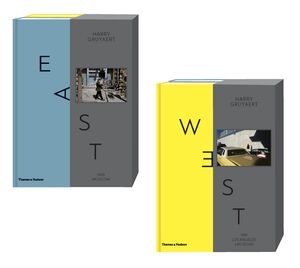 A two- volume publication, one volume featuring Harry Gruyaert’s photographs of Los Angeles and Las Vegas in 1981, the other his photographs taken in Moscow in 1989

At a time when the world was politically divided into East and West, Magnum photographer Harry Gruyaert’s quest for light and sensuality led him to capture the colors of two very different worlds: the vibrant glitziness of Las Vegas and Los Angeles in 1981, and the austere restraint of Moscow in 1989 just before the fall of the Soviet Union. The resulting photographs form a striking record of a remarkable era.

Including an essay by writer, curator, and artist David Campany, this two-volume publication reproduces almost 100 photographs from the series, nearly seventy of which are being published for the very first time. With each volume presented in a half slipcase, Harry Gruyaert: East/West offers an in-depth look at one of the world’s foremost photographers in two unique and contrasting locations, at a historically critical moment.

David Campany is a writer, curator, and artist, working mainly with photography. His books include A Handful of Dust, The Open Road: photography and the American road trip, Walker Evans: the magazine work, Gasoline, Jeff Wall: Picture for Women, Photography and Cinema, and Art and Photography.