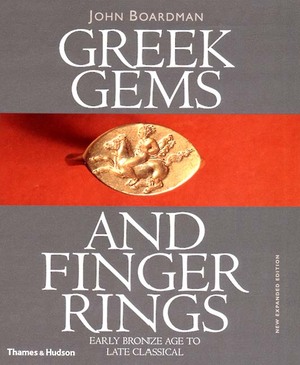 The miniaturist art of gem engraving is the least familiar of the major arts of ancient Greece, yet we know it to have been practiced by the greatest artists. This book presents a comprehensive account of the art in Greek lands from the early Bronze Age down to the Hellenistic period. The gems are related to history and to the artistic achievements in other media of their day, and the subject matter of the scenes engraved upon them is examined and found to hold much that will be new to students of Greek myth and iconography. The development of the Bronze Age studios in the Minoan and Mycenaean world is discussed, and the works of the great period of Classical gem engraving are resolved into their styles and schools, with a special chapter devoted to Greek works within the Persian Empire. The attributions and discussion are supported by full notes and lists. The plates, which show the gems enlarged up to four times their natural size, present the fullest possible range of devices and styles from all periods. This revised edition will be an essential work of reference for students and scholars, as well as a thorough survey of the subject for all lovers of Greek art. 1395 illustrations, 51 in color.

John Boardman, Lincoln Professor Emeritus of Classical Archaeology and Art at Oxford University, has written widely on the art and archaeology of ancient Greece. His previous books include The Greeks Overseas, The History of Greek Vases, The World of Ancient Art, and others.