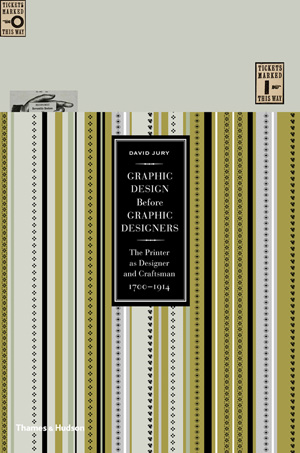 Who first coined the phrase “graphic design,” a term dating from the 1920s, or first referred to themselves as a “graphic designer” are issues still argued to this day. What is certain is that the kinds of printed material a graphic designer could create were around long before the formulation of such a convenient, if sometimes troublesome, term. Here David Jury explores how the “jobbing” printer who produced handbills, posters, catalogues, advertisements, and labels in the eighteenth, nineteenth, and early twentieth centuries was the true progenitor of graphic design, rather than the “noble presses” of the Arts and Crafts movement. Based on original research and aided by a wealth of delightful and fully captioned examples that reveal the extraordinary skill, craft, design sense, and intelligence of those who created them, the book charts the evolution of “print” into “graphic design.” It will be of lasting interest to graphic designers, design and social historians, and collectors of print and printed ephemera alike.

[A] journey of the art of graphic design through its historical past.

Beautifully produced, colorfully illustrated, logically organized, and authoritative in every respect, this will become a standard account in the graphic design history canon.

David Jury is an award-winning graphic designer, and head of the MA course Art, Design, and the Book at the Colchester Institute in England. His previous books include Typography Today.