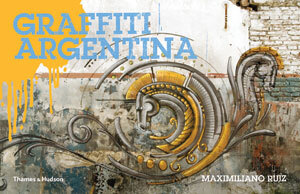 The vibrant graffiti and street scene in Argentina: the product of a unique mixture of influences.

In the 1970s when graffiti first became part of mainstream art in the United States and Europe, Argentina was living under a dictatorial regime. Long after its demise, the dangers of self-expression still inhibited graffiti's development there. But today, artists have developed innovative styles and techniques all their own, giving them a special place in the international scene.

Graffiti Argentina is a collaboration between the Argentine film director Maximiliano Ruiz and three talented graphic designers: Pauline Aubry, Damian E. Regazzoni, and Jorge Cordoba. The exciting visual story that they have compiled is complemented by artist interviews on the first efflorescence of graffiti in the 1990s; on the movement in recent years; on the underground use of tags, train graffiti, and political images; and on the sketches and designs that have come from the street to influence the visual culture of the country.

Maximiliano Ruiz is the founder of La Maranguel Films.