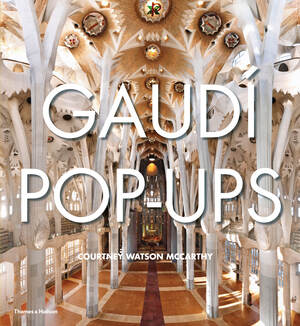 Specially created pop-ups explore the vision and creations of this seminal architect.

“Those who look for the laws of Nature as a support for their new works collaborate with the creator.” —Antoni Gaudí

For over a century the fantastical works of the Catalan architect and designer Antoni Gaudí have enraptured visitors to the city of Barcelona. Gaudí’s creations reflected his abiding passion for nature and religion, as well as his meticulous attention to detail. Perhaps no other architect has become so synonymous with the aesthetic style of a city. Gaudí Pop-Ups celebrates the unique style of this visionary architect with pop-ups of some of his most famous creations. The inventive paper constructions of Courtney Watson McCarthy bring these spectacular works to life in a new and fascinating way that enables us to further appreciate the genius of Gaudí.

You are as close to Barcelona as you can be without going there.

The inventive paper constructions of Courtney Watson McCarthy bring these spectacular works to life in a new and fascinating way that enables us to further appreciate their genius.