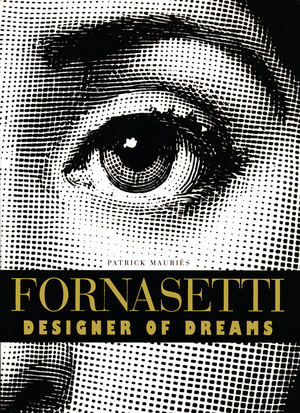 “Glorious . . . almost as good as owning one of the things themselves.”—The World of Interiors

Piero Fornasetti lived and worked in Milan from 1935 until his death in 1988. During this long career he established an enduring reputation as a designer with a style that was distinctly his own—a style based on illusion, architectural perspectives, and a host of personal leitmotifs, such as the sun, playing cards, fish, and flowers, from which he spun seemingly endless variations.

Today his work seems more contemporary and is more popular than ever. Designers and collectors celebrate his use of allusion, unsettling images, and striking juxtaposition to create unique, whimsical objects. Fornasetti’s masterpieces continue to shock, delight, and inspire.

By ignoring the winds of fashion, Fornasetti often presaged it and eventually outlasted it…He invented a world that was simply too enchanting to be real.

In an age of sleek, unadorned Modernism, Fornasetti ran counter to and took joyous delight in decorating anything and everything.

[A book] we are fortunate to have back in print.