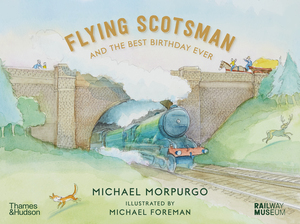 Iris knows everything there is to know about Flying Scotsman. Her dad is the famous train’s driver, and nothing makes her prouder than seeing him at work. But each time the Flying Scotsman pulls away, Iris wishes more than anything that she could be with her dad in the driver’s cab.

Then again, who’s to stop her?

Our cheeky train enthusiast protagonist hops aboard the Flying Scotsman as it travels from London to Edinburgh, breaking the speed record for steam locomotives on its way! But will Iris ever achieve her dream of riding in the driver’s cab of the greatest train in the world, like her dad?

This heartwarming story captures the adventurous spirit of the golden age of steam travel, while paying tribute to the amazing workers who drove the trains and kept the railways running. Readers even get to see that when Iris grows up, she becomes one of the first women to work on the railways during World War II. Joyously illustrated, this book is the ultimate celebration of the great Flying Scotsman and the golden age of train travel.

"Morpurgo's narrative rolls along with grace as well as purpose…while Foreman's expressive watercolor-and-pencil illustrations beautifully portray the people, the stations, and the train, as well as the landscapes seen through its windows… This captivating and ultimately joyful book has appeal for train-lovers across generations."

Michael Morpurgo is one of the United Kingdom’s best-loved authors and storytellers. He has written more than 150 books, including the internationally celebrated War Horse, and was appointed Children’s Laureate in 2003. Morpurgo was awarded an Order of the British Empire in 2007 and a knighthood in 2018 for services to literature and charity.