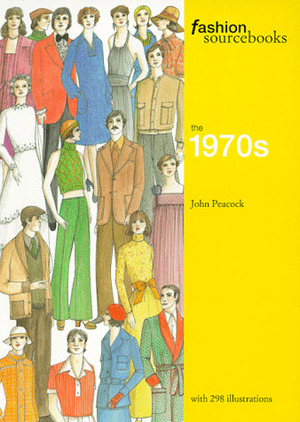 In the 1970s, fashion became increasingly individualistic for both men and women. Off-the-peg clothes were mixed with fashions from the previous decade and with ethnic garment and accessories from around the world.

Fashion Sourcebooks is a series of beautifully illustrated paperbacks presenting the costume drawings of John Peacock. The series charts the development of women's and men's clothing from 1900 onwards, with a volume devoted to the fashions of each decade. John Peacock's Fashion Sourcebooks are destined to become an indispensable part of the library of any fashion enthusiast, historian, or collector, and are sure to provide inspiration to any designer or student working in the performing arts.

John Peacock was Senior Costume Designer for BBC Television for many years. His many books include The Complete Fashion Sourcebook; Costume: 1066 to the Present; The Chronicle of Western Costume; Twentieth-Century Fashion; Fashion Since 1900; Fashion Accessories; Shoes; Men’s Fashion; Twentieth-Century Jewelry; and many others.