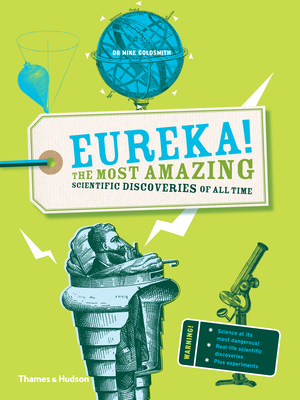 “Amazing, revolutionary, death-defying, and even disgusting are just some of the ways to describe the 19 scientific discoveries presented here.” —Booklist

“Kids are introduced to the glorious history of scientific discovery. Well-written and inspiring.” —Smart Books for Smart Kids

Eureka! tells the stories of the most revolutionary scientific discoveries throughout history. Through a fusion of history and popular science, readers are introduced to the contributions made by scientists such as Galileo, Louis Pasteur, and Marie Curie, and the passion and inspiration that fueled their discoveries.

The book is divided into key subject areas, including medicine, the human body, atoms and molecules, planet Earth, and the universe. Read the gripping real-life experiences of scientists who often risked injury and sometimes even their lives to change the way we think. Each thrilling “Eureka!” moment is brought vividly to life with fascinating details of experiments and equipment and stories of the scientists’ terrible blunders and lucky mistakes. This book brings the excitement of scientific exploration vividly to life for young readers who are increasingly encouraged to pursue professions in the sciences.

Dr. Mike Goldsmith is a research scientist and science writer. He has written more than fifty books for children, including Eureka!. He has been shortlisted twice for the Junior Aventis Science Prize.