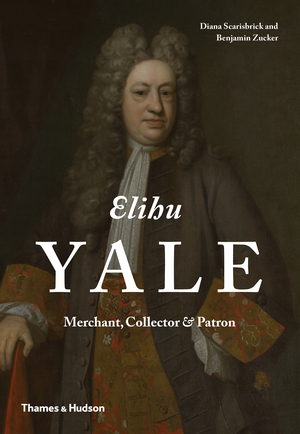 Elihu Yale's name is famous for the great educational institution, Yale University, of which he was an early benefactor. He made his fortune in India, mostly through trading in diamonds. Arriving in Madras in 1672, through his outstanding abilities he rose through the hierarchy of the East India Company settlement from clerk to governor. When he returned to London in 1699 he brought with him Indian gems, furniture, and textiles, and proceeded to amass a collection of some ten thousand items, dispersed at seven auction sales after his death in 1721. The catalogs of these sales survive, providing information about the lively London art market. Hitherto neglected by historians, the Yale sales prove to be a landmark in the history both of collecting and of auctioning art in early 18th-century England.

The authors explore Elihu Yale’s life and interests, and then turn to a study of Yale as a dealer (particularly of gems) and a collector of diamonds and jewelry, works of art, furniture, books, and other objects—some of which are now at Yale University, and some in national collections around Britain.

Ms. Scarisbrick, an art historian specializing in jewelry and gems, and Mr. Zucker, a Yale alumnus and gem dealer, are well placed to focus on the ways Yale spent his vast riches.

Scarisbrick and Zucker, who are both experts in gems and jewels …document the lively world of collecting and auctions in London during the English Enlightenment…Recommended.

Yale the collector and connoisseur is the main subject of this unusual book…Scarisbrick and Zucker both specialize in gems and jewelry …and for the bulk of the book they draw on catalogues of the auctions held after Yale's death, using them to describe the belongings and tastes of a man who loved to acquire the finest.

Elihu Yale is a man worth remembering…Succinctly but elegantly recounted. This book provides a vivid account of the diamond trade in all its aspects and demonstrates its subject's prodigious, manifold skills.

Diana Scarisbrick is an art historian specializing in the history of engraved gems and jewelry. Her publications include Rings: Jewelry of Power, Love and Loyalty and Portrait Jewels: Opulence and Intimacy from the Medici to the Romanovs.

Benjamin Zucker, a graduate of Yale University, is one of the world’s leading gem dealers, based in New York.