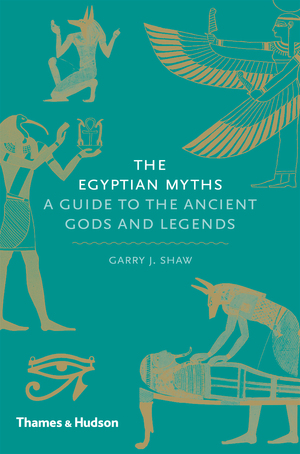 This survey of Egyptian mythology explores how the ancient Nile-dwellers explained the world around them. It delves into the creation and evolution of the world and the reigns of the gods on earth, before introducing us to the manifestations of Egypt’s deities in the natural environment; the inventive ways in which the Egyptians dealt with the invisible forces all around them; and their beliefs about life after death.

Through his engaging narrative, Garry Shaw guides us through the mythic adventures of such famous deities as Osiris, the god murdered by his jealous brother Seth; the magical and sometimes devious Isis, who plotted to gain the power of the sun god Re; and Horus, who defeated his uncle Seth to become king of Egypt. He also introduces us to lesser known myths, such as the rebellions against Re; Geb’s quest for Re’s magical wig; and the flaying of the unfortunate god Nemty. From stars and heavenly bodies sailing on boats, to the wind as manifestation of the god Shu, to gods, goddesses, ghosts, and demons—beings that could be aggressive, helpful, wise, or dangerous—Shaw goes on to explain how the Egyptians encountered the mythological in their everyday lives.

The myths are presented here in a down-to-earth and often humorous manner, consistent with the spirit of the texts, exposing the gamut of human emotion from the rage of the solar deity to the lamentations of the widowed Isis … will be fitting additions to the library of the Nile traveller … can be read with interest and pleasure in an armchair.

With academic authority and enjoyable style, assisted by numerous, well-chosen illustrations of gods and goddesses, Shaw's book is a lively introduction to its subject.

Beautifully set out on high quality paper … and featuring some lesser known stories … alongside more familiar myths, this is a good introduction to the complex mythology of the ancient Egyptians and their unique way of understanding the world around them.

The Egyptian Myths: A Guide to the Ancient Gods and Legends uncovers it all.

Garry J. Shaw is an Egyptologist and travel writer who regularly writes for the Art Newspaper and has contributed to Apollo magazine, History Today, Current World Archaeology, and Timeless Travels. He is the author of The Egyptian Myths: A Guide to the Ancient Gods and Legends.