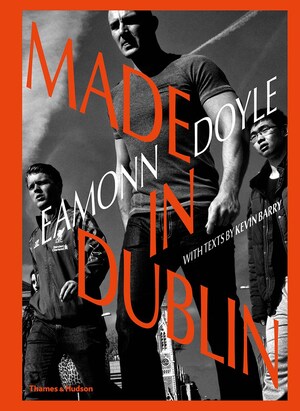 Dublin has captured countless imaginations and inspired some of the greatest artists and writers throughout history. Focused on D1, Dublin’s city center, photographer Eamonn Doyle’s three major bodies of work, “i,” “On,” and “End” brought together here, tell the tale of today’s Dublin and, in doing so, tell a broader story of today’s Ireland. Doyle’s street photography is a thrill to the system, revealing the extraordinary within the ordinary to paint a striking portrait of a modern and multicultural capital city. Reproduced in vivid color, the commonplace is seen anew and made epic as the city’s inhabitants appear in stark, black and white going about their daily business. Doyle’s work features everyday life through the lens and voice of the street. Punctuating Doyle’s photography are specially commissioned narratives by celebrated writer Kevin Barry, evoking the sights, smells, sounds, and sensations of a Dubliner’s daily life.

A delightful symphony, a cinematic kaleidoscope…to present a dynamic portrait of a city… The individual monochrome portraits are stunning…color is used sparingly… The images Doyle shows us of the people of Dublin give us a sense of complexity and strife, but also of striving and possibilities… Exciting from beginning to end.

Eamonn Doyle is a photographer and music producer based in Dublin, Ireland. His work has earned him an international reputation.

Kevin Barry is a prize-winning author of two collections of short stories and two novels. His stories have appeared in the New Yorker.