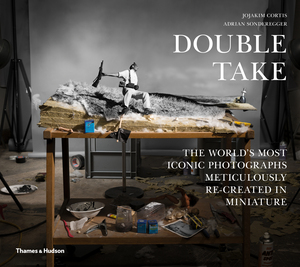 Forty of the world’s most iconic images, meticulously reproduced in miniature by two Swiss photographers

Double Take presents forty astonishingly accurate reconstructions of iconic photographs—ranging from the earliest known to the world’s most expensive.

These images have been painstakingly re-created in miniature by two photographers, Jojakim Cortis and Adrian Sonderegger. Inspired by the record auction price of $4.3 million set by Andreas Gursky’s Rhein II in 2011, the duo set themselves a challenge: could they reconstruct that image in their Zürich studio? The photograph they created from a miniature diorama of Rhein II was a success and became a starting point for a larger personal project:a series of photographs of these miniature re-creations the team made themselves, imitating iconic photographs that captured pivotal historical events.

A technical tour de force, Double Take asks of image making: can the image ever be trusted? With images showing the reconstruction process, a supporting essay, and an in-depth interview with the photographers, Double Take is for lovers of photography or miniatures—with a twist.

Jojakim Cortis studied photography at Zürich University of the Arts (ZHDK). He has been working as a freelance photographer since 2006, and as a technical assistant and lecturer at ZHDK since 2009.

Adrian Sonderegger studied photography at ZHDK. He worked as an assistant for Jules Spinach and lectured at the School for Art and Design Zürich. He has been working as a freelance photographer since 2006.