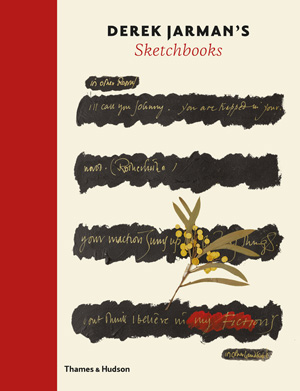 Legendary filmmaker Derek Jarman recorded his life and work in highly detailed sketchbooks. Encompassing both the private and the professional, these offer a personal view into the life and career of a highly influential filmmaker and artist.

Drawn from the collection of handmade books that Jarman gave to the British Film Institute shortly before his death in 1994, Derek Jarman’s Sketchbooks showcases the most insightful and beautiful pages. Each of the original volumes is composed of drawings, photographs, and cuttings; pressed flowers are set beside scrawled ideas, and carefully penned poems accompany typed and edited working scripts. These once-private books are an intimate pictorial record of the detailed planning and research and the creative and emotional engagement behind every scene in Jarman’s films.

Jarman …filled an impressive number of sketchbooks with exquisite calligraphy, drawings, clippings of scenes and costumes, photographs of his gardens and detailed notations for dialogue and editing, many faithfully reproduced here.

[An] exquisitely curated book…Voluptuous works of art in themselves, these sketchbooks, taken from handmade books the filmmaker gave to the British Film Institute before his death in 1994, blend the written and the visual, revealing the inner workings of the creative process and Jarman's evolution as a filmmaker, artist, and gardener.

Stephen Farthing is the Rootstein Hopkins research professor in drawing at the University of the Arts, London.

Ed Webb-Ingall is a film producer who holds a research position at the Chelsea College of Art and Design, London.

Tilda Swinton is an Academy Award-winning actress whose film debut in Derek Jarman’s Caravaggio marked the beginning of a close association with the director. She lives in Scotland.