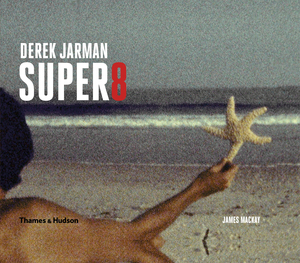 A selection of stills from Derek Jarman’s many short Super 8 films, curated and commented on by some of the most important names in contemporary cinema

Derek Jarman was one of most influential filmmakers of the late twentieth century, transcending the avant-garde to make cult feature films such as Jubilee (1978) and Caravaggio (1986). He was a painter before venturing into the world of film, and a painter's mentality permeates all his work, particularly his experiments in Super 8 film.

The Super 8s show Jarman at his most visually courageous and creative, using rich color and bold compositions, and experimenting with techniques such as superimposition and the use of prisms and filters. When Jarman died, he left his entire collection of ninety-two Super 8s to James Mackay, who has spent the last twenty years archiving, restoring, and digitizing them. Here, Mackay presents stills from these works, selected by artists and filmmakers who have engaged with or been influenced by Jarman. This remarkable body of work contains some of the most evocative images from the filmmaker’s entire career, accompanied by insightful commentaries from contributors such as Gus Van Sant, Tacita Dean, and Isaac Julien.

Considerable insight is offered…Shrewd observations and technical details on the transfer process and results will be of particular interest to preservationists…Film scholars and fans of Jarman will appreciate these essays [and] alluring stills from his more obscure works.

Exemplifies why [Jarman is] one of te most influential filmmakers of the 20th century.

Long overdue…James Mackay managed to convey a rich impression of movement by filling almost half of the book's pages with stills from over twenty Super 8 films… . The pages highlight the coarse texture of the images, while the emotional subtexts seem almost magically released from the pages, affecting us surprisingly deeply.

James Mackay studied art before becoming the cinema coordinator at the London Filmmakers’ Co-op. He met Derek Jarman in 1979 and went on to produce many of his films. Mackay now oversees the archive on behalf of the LUMA Foundation.