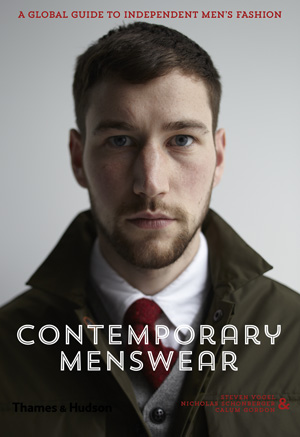 The essential and inspirational reference to more than fifty international designers, labels, brands, stores, blogs and websites that have shaped independent men’s fashion over the last decade

In the past, menswear and creative fashion were not words that were easily associated with one another. While a rich tradition existed in men’s tailoring, menswear was seen as very much the poor relation to womenswear. Times have changed: menswear, notably that created and produced by independent labels, is a hotbed of creativity; separate fashion weeks devoted to menswear are now held in Paris, London, and Milan; and the menswear scene is hotly discussed, critiqued, and debated in the press and online.

Contemporary Menswear presents in-depth profiles of more than fifty of the designers, labels, brands, stores, websites, and blogs that have shaped and continue to shape menswear in the twenty-first century. From classic heritage labels such as Albam Clothing through to dynamic, new labels such as Tellason (crafted, desirable denim) this is a detailed and insightful guide to an independent menswear scene that has grown to be a respected and highly creative part of global fashion.

The editors of this poignant overview have captured and collated the major visionaries behind contemporary menswear circa N-O-W…Packed with insightful profiles and inspiring trend essays.

— The Manual: The Essential Guide for Men

Let's say you're a man who doesn't have a broad knowledge of menswear, but is extremely curious about the scene — then Contemporary Menswear is a book for you.

Steven Vogel is the co-owner of Black Lodges, a creative agency in Hamburg specializing in design, event management, and brand strategy for clients including Burton, Levi Strauss, and Kangol.

Nicholas Schonberger is a writer, blogger, and critic of fashion, culture, and music. He lives in New York.

Calum Gordon is a Glasgow-based freelance writer and creative consultant who specializes in fashion and culture. He is Editor-in-Chief of The Reference Council, an influential online menswear magazine.