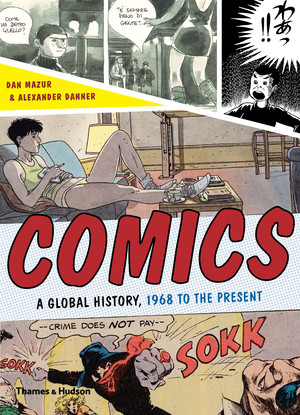 Comics, manga, bandes dessinées, fumetti, tebeo, historietas… no matter the name, they have been a powerful medium across four continents for decades. This is the history of comics around the world from the late 1960s to the dawn of the 21st century.

Comics is a richly illustrated narrative of extraordinary scope. Examples from all over the world include everything from Crumb and Kirby to RAW; from Metal Hurlant to Marjane Satrapi to nouvelle manga; from both the American mainstream and underground to the evolving and influential British scene. The images here are bright and colorful, dark and brooding, arresting and pleasant, all at the same time. An unprecedented collection includes around 260 expertly chosen illustrations, many reproduced in full-page format for more sophisticated analysis.

The authors, two uniquely positioned and knowledgeable authorities, are the first to write a broadly comprehensive history of this most accessible, democratic, and occasionally subversive modern popular art form, displaying an intimate familiarity with schools and styles, writers, artists, and companies across countries and generations. In showing us both post-apocalyptic dreamscapes and portraits of the everyday, Comics looks at this thirty-plus year period through a very unique lens.

Global History is not meant to be the last word on its subject—it is, on the contrary, the first word. It will be, I hope, the starting point for young scholars and enthusiasts in the same way that Gardner, Janson and Mast have been.

— The Great God Pan is Dead

Mazur and Danner follow a long history of comics practitioners and aficionados who double and historians of the medium: unlike many, they offer a volume that resonates with scholarly authority…This richly dense treatise will best be read cover to cover…Highly recommended.

A beautiful book filed with glorious reprints in color and black and white [that] leaves the reader wanting more…Mazur and Danner are studious in their research and analysis…Worth reading for historians and fans alike.

A very helpful book, which will probably end up on many syllabi of academic courses. It is certainly a fine start of hopefully more global, comparative approaches to the history of graphic narratives.

One of the most complete, interconnected histories of comics currently available…Mazur and Danner manage to generate a compelling history made up of the various aesthetic strands that have grown out of, and in many cases have transcended, their national/cultural origins. For fans and scholars wanting a more comprehensive history of the medium, one that doesn't begin and end with the American comic book, Comics: A Global History should be the first place that they turn.

For the aficionado or the neophyte, Comics is a useful overview of a richly creative period in a burgeoning art. And despite the good scholarship the authors have managed to retain the buoyancy and upbeat air attendant on most comics.

Dan Mazur is a cartoonist, teacher, journalist, editor, and screenwriter. Co-founder of the Boston Comics Roundtable, he has edited numerous indie comics anthologies while his articles on comics have appeared in the Boston Phoenix and the International Journal of Comic Art.

Alexander Danner teaches Writing the Graphic Novel and other courses at Emerson College, Boston, and is the co-author of the textbook Character Design for Graphic Novels. He also writes about comics for a range of publications.