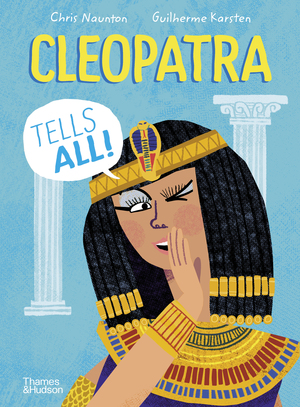 What would happen if the famous people of ancient Egypt were given the opportunity to tell their version of historical events—in their own words? It would be incredible! In this highly entertaining and comically illustrated book, Cleopatra is brought back to life to tell her own version of history.

The politically savvy, multilingual, cosmopolitan ruler of Alexandria, Cleopatra reveals herself to be the world’s first influencer. Finally able to tell her own version of events, readers will reel at her amazing story, including how she created an army of mercenaries to counter her bullying brother and how she secured the support of two of the world’s most powerful men—Julius Caesar and Mark Antony. Witty, contemporary, and full of sass, this is Cleopatra #nofilter.

Guilherme Karsten is an award- winning Brazilian illustrator who has illustrated over ten books for children. He is the author and illustrator of Aaahhh! He won the Golden Pinwheel Grand Award and a Biennial of Illustrations Bratislava Plaque in 2019.