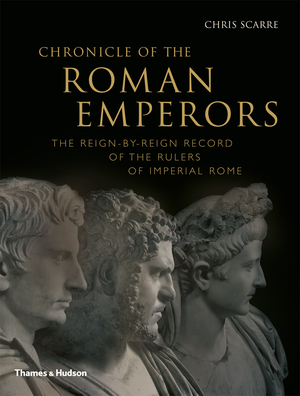 The essential dual-purpose book on imperial Rome: a highly readable popular history and a unique work of reference.

This is the first book to focus on the succession of rulers of imperial Rome, using timelines and other visual aids throughout. Now no one need be in any doubt as to who built the Colosseum or when Rome was sacked by the Goths: Chronicle of the Roman Emperors provides the answers quickly and authoritatively.

The biographical portraits of the principal emperors from Augustus to Constantine, together with a concluding section on the later emperors, make the book a comprehensive history of imperial Rome. Colorful contemporary judgments by writers such as Suetonius and Tacitus are balanced by judicious character assessments made in the light of modern research. The famous and the infamous—Caligula and Claudius, Trajan and Caracalla—receive their due, while lesser names emerge clearly from the shadows for the first time.

In addition to timelines detailing major events, each emperor is introduced by a coin portrait, a bust, and a datafile listing key information, such as name at birth, full imperial titles, and place and manner of death.

By far the best book of its kind available.

A fine chronicle which will prove hard to put down.

Chris Scarre is a professor of prehistory in the department of archaeology at Durham University, U.K. He is editor of The Human Past (4th ed.) and author of Ancient Civilizations (with Brian Fagan and Charles Golden, 5th ed.), Landscapes of Neolithic Brittany, and The Megalithic Monuments of Britain and Ireland. From 2013 to 2017 he was editor of the leading international journal Antiquity, and was previously an advisory board member for the National Geographic Society.