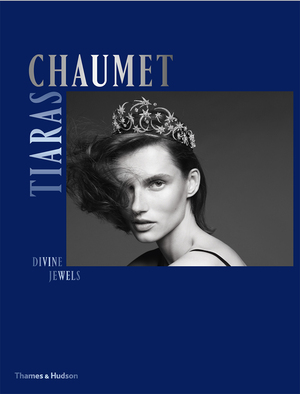 An exclusive volume featuring the most stunning tiaras created by Chaumet, from the eighteenth century to today, as it celebrates this luxury jeweler which continues to create bespoke pieces in the heart of Paris.

Founded in 1780 in Paris, Chaumet became the most prestigious and sought-after jeweler in Europe after being named the official jeweler to Napoleon’s wife, Empress Joséphine. Known for dazzling craftmanship, Chaumet specialized in tiaras. These social symbols and fashion accessories have been popular throughout the centuries, from historical tiaras created for royalty to modern art deco pieces designed for wealthy 1920s flappers. The rarely viewed tiaras illustrated in this book are presented in thematic sections, such as “Nature,” “Skies,” “Graphic Lines,” “Architecture,” and “Power.” They are introduced by two short essays—one from V&A jewelry curator Clare Phillips; the other from fashion expert Natasha Fraser- Cavassoni—examining the history of tiaras and the role they play in fashion.

Featuring over two hundred illustrations, including specially commissioned photographs, Chaumet is a stunning tribute to an enduring symbol of style and power.

A sweeping retrospective of the house's dazzling creations.

Beautifully illustrated… With over 200 illustrations, the book presents a selection of the distinctive tiaras the maison has crafted over nearly 250 years.

Thoughtful essays…provide an insightful time line that traces how Chaumet has given us tiaras at every major fashion and decorative arts epoch in history.

Natasha Fraser-Cavassoni is the author of numerous books, including Vogue on Yves Saint Laurent and After Andy: Adventures in Warhol Land. She was the European editor for Harper’s Bazaar from 1999 to 2004, after serving as a staff member and journalist at Women’s Wear Daily and W magazine. She lives in Paris.

Clare Phillips is a curator in the Sculpture, Metalwork, Ceramics & Glass Department at the Victoria and Albert Museum. Her publications include Jewelry: From Antiquity to the Present (1996) and contributions to Art Nouveau 1890-1914 (V&A, 2002), and Silver (V&A, 2003).