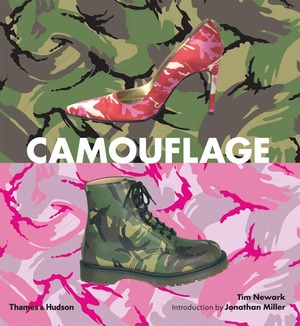 The fascinating story of camouflage: from nature to the military to the worlds of art, design, and popular culture.

The animal kingdom provides examples of all the essential principles of camouflage: the chameleon, whose colors change to merge with its setting; the zebra, whose vivid stripes disrupt its outline and make it more difficult for predators to sight from a distance; the stick insect that pretends to be what it's not.

Creativity in the art of disguise was spurred in World War I by the threats of aerial reconnaissance and long-range enemy fire. Aircraft and ships were painted with lozenge and zigzag patterns to make them more difficult to target. Artists were involved in creating these patterns, and were influenced in turn by the extraordinary painted vessels, said to be like floating cubist paintings. In 1919 the Chelsea Arts Club in London, inspired by wartime camouflage patterns, staged the Dazzle Ball, the first known example of camouflage influencing popular culture. Since then, artists from Pablo Picasso to Andy Warhol to Bridget Riley have explored the themes and extremes of camouflage and optical illusion, while camouflage patterns in clothes and accessories have filtered from the street to high fashion and back again.

Uniforms made from camouflage-printed textiles were first developed before World War II, and teams of artists, designers, and scientists worked together to create ever more sophisticated modes of camouflage and disguise. Today's high-tech research on textiles that are resistant to infrared and thermal detection shows a new direction in the future of camouflage.

Tim Newark was the editor for many years of Military Illustrated, the popular British military history magazine. He is the author of numerous books, including Camouflage, Highlander, The Mafia of War, and has written for the Financial Times and the Daily Telegraph. He lives in London, England.

Jonathan Miller is renowned worldwide for his contributions to theater, opera, and television.