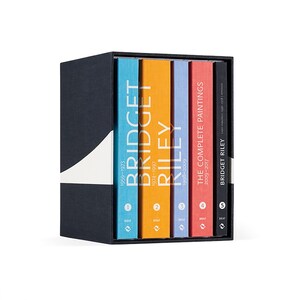 Bridget Riley (b. 1931) trained as a figurative painter before emerging as one of the most prominent masters of Op-Art. Since then her abstract work has continued to garner critical acclaim and remains as relevant as ever—with a major new site-specific painting opening at the Chinati Foundation in Marfa, TX, in October 2017, and an exhibition at David Zwirner Gallery, NY, in 2018.

This complete catalog of Riley’s paintings assembles her remarkable oeuvre for the first time, reproduced to the highest standards in a highly collectible five- volume box set: a must- have for devotees of twentieth century contemporary art.

A reasoned and meticulously detailed register of over 600 works… One does not read Bridget Riley so much as experience it like a retrospective exhibition, in a progression that is as linear as the paintings for which she is best known: from her first paintings, copies of the pointillist Seurat, to studious geometric canvases to later mind-bending visual experiences that wink at the barriers of consciousness.

Bridget Riley is one of the most significant abstract painters working today and a master of the Op- Art style, which came to prominence in the 1960s. Her work is represented in the collections of The Art Institute of Chicago, Dia Art Foundation, NY; Los Angeles County Museum of Art; The Metropolitan Museum of Art, NY; The Museum of Modern Art, NY; and other institutions around the world.

Robert Kudielka is an art historian and critic, and a leading expert on Bridget Riley’s work.