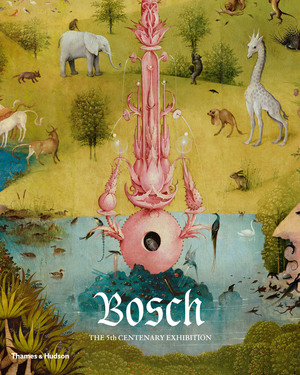 A comprehensive look at the work of Jheronimus Bosch, published to coincide with the 5th centenary of the artist’s death and in conjunction with an exhibition at the Museo del Prado

Jheronimus van Aken (1450–1516) was born and lived in the Dutch city of ‘s-Hertogenbosch (Bois-le-Duc) in North Brabant; in signing himself “Jheronimus Bosch” he linked his fame to his native city. In Spain, where he was known as “el Bosco,” his work earned considerable acclaim early in his career.

Bosch came from a long line of painters and soon mastered the skills of his craft. In stylistic terms, however, he departed from tradition, developing his own outlook. His inventive approach to both content and form is a hallmark of his work. Bosch played a pioneering role in the transformation of Flemish painting techniques in the early sixteenth century. Nowhere is this radical change more apparent than in his direct application of dabs of paint to the pictorial surface to create highlights and nuances or to define forms, almost as though he were drawing with the paintbrush.

This book, published for the exhibition at the Museo del Prado to mark the 500th anniversary of Bosch’s death, provides up-to-date information on the artist’s life and family, examines the data available regarding his patrons, surveys his status as painter and draftsman, and investigates his visual and textual sources as well as his values and ideology, with particular reference to The Garden of Earthly Delights and his depictions of Hell. The catalogue entries for the paintings belonging to the Prado collection discuss the findings of recent technical research carried out specifically for this exhibition.

Pilar Silva Maroto is curator of the early Flemish art collections at the Museo del Prado.

Pilar Silva Maroto is curator of the early Flemish art collections at the Museo del Prado.