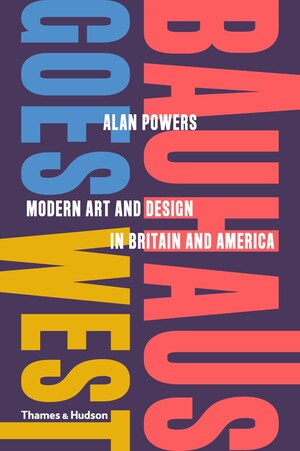 An exploration of the Bauhaus school and its legacy in the context of the modernist period, including its wider influence on art, design, and education.

Bauhaus Goes West is the story of cultural and artistic exchange between Germany and the West over a period of seventy years. It presents a view of the influential Bauhaus school in relation to the wider modernist period, distinguishing between the received idea of the Bauhaus and the documented reality. Initially, the Bauhaus was seen as an educational experiment, only later was it recognized as a style and a movement.

Working from meticulous research, Alan Powers reexamines speculations about the reception and understanding of individuals connected with the Bauhaus school and what they ultimately achieved.

Looking in greater detail at the theory and practice of art, design, and architecture between the arts and crafts movement and modernism, this book challenges the assumption that the 1920s represented a void of reactionary conservatism. Bauhaus Goes West offers an opportunity to recover some of the overlooked aspects of avant-garde that ran parallel with the work of the Bauhaus, such as the film-making of Francis Brugui re and Len Lye, and the development of art instruction for children under Marion Richardson and the London County Council.

Worthwhile… Lucid and well-illustrated, it offers capsule studies of key players and examines the spread of the Bauhaus as it came into the English-speaking world.

Alan Powers is Professor of Architecture and Cultural History at the University of Greenwich in London. An art historian, practicing artist, and author, he has written a number of books on Eric Ravilious.