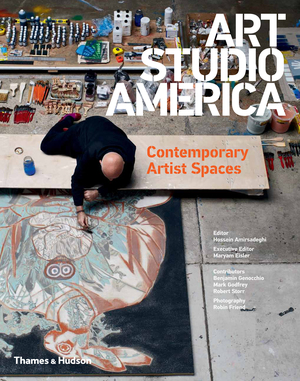 Large-format and illustrated with original photography: a fresh look at the current scene for art lovers and a unique introduction to the art world for the novice

For centuries, America's permutations of climate and landscape and its tantalizing suggestion of unlimited possibilities have inspired some of history's greatest minds to embark on both literal and imaginary journeys of exploration, none more so than its visual artists. Contrasting intimate visits to artists' studios with explorations of the country's sweeping landscapes of light and form that have inspired artists since the Luminists and the Hudson River School, here is a privileged look at the dreams, ideas, and thoughts of more than one hundred American artists who are active today.

From New York's skyline to Southern California's sunny boardwalks, Art Studio America will embolden readers the chance to embark on transformative journeys of their own.

Not since Alexander Liberman's classic The Artist and His Studio …has there been a more ambitious undertaking to broaden the scale of this sort of book with revealing studio photographs while also including insightful texts and wonderful interviews.

Explores the relationship between surroundings and creativity, contrasting intimate visits to artist studios with explorations of America's landscapes.

A Route 66 kind of journey across America's multifarious landscapes, stopping on the way to chat with a wide range of the country's artists and getting a good snoop around their studios.

Not since Alexander Liberman's classic The Artist and His Studio …has there been a more ambitious undertaking to broaden the scale of this sort of book with revealing studio photographs while also including insightful texts and wonderful interviews.

This beautifully illustrated journey through artists' studios provides an unprecedented look into the workings of one of the world's largest artistic communities.

One of Whitewall's favorite art books from 2013.

Prepare to be dazzled by the workspaces of America's most gifted artists. This hefty survey shows the milieu in which these creators thrive…Smart essays by Robert Storr, Ben Genocchio, and Mark Godfrey provide context.

Authors Maryam Eisler and Hossein Amirsadeghi spent a full year jetting and driving between the American coasts, peering into and documenting the private worlds of 115 artists.

In depth Q&As and behind-the-scenes photos capture the essence of modern art in this collection.

Showcases photographs and interviews with established American artists in their studios.

The line-up is an A-list of anyone who's anyone in the contemporary art world.

With interviews by leading art writers, the artists reveal not only their personal spaces but also their personal thoughts on everything from politics to passports.

A sumptuous, heavily illustrated look at the studios of artists across the country.

We find Laurie Simmons, Mickalene Thomas, Gregory Crewdson, and other darlings of contemporary art at their most open, poring over works in progress.

A lavish compendium both trendy and archival, offering a snapshot glimpse and encyclopedic breadth…Recommended.