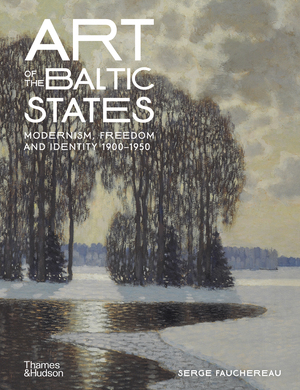 A lavishly illustrated reference on a little-known chapter in art history—the art of the three Baltic States, covering a wide range of mediums, movements, and styles.

In this highly illustrated volume, Serge Fauchereau presents the modern art scene of the Baltic countries, showing how artists from Lithuania, Latvia, and Estonia created their own art movement rooted in Baltic life. By the late nineteenth and early twentieth century, Baltic artists and writers were starting to reclaim and promote their artistic heritage as radically distinct from that of the invading nations, with pioneers such as M. K. Ciurlionis and Vilhelms Purvitis demonstrating rare originality in their work. Focusing on the modern era, Fauchereau tackles a broad range of artistic fields such as painting, sculpture, photography, and art criticism and includes works by Petras Kalpokas, Aleksandra Belcova, and Eduard Ole, among many others.

Art of the Baltic States is organized into three main chapters, documenting the history of art in each country. Enriched with illustrations from important museum collections, Fauchereau covers key art movements as well as their rich and complex historical background, from time under the Czars and the German crown to the invasion by the Soviet Union and beyond. With each country showcased in its own lavishly illustrated section, this is a wonderful guide to a vibrant field in European art history that is often overlooked but deserves rediscovery and a place on the global stage.

Serge Fauchereau is a scholar and art critic. He was a professor of American literature at New York University, and has curated major exhibitions at the Pompidou Center. He has published over twenty books, including a dozen monographs such as Braque, Jean Arp, Kupka, and Malevich.