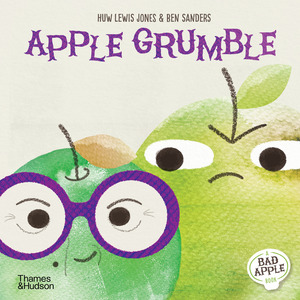 Apple is back for more hilarious and bad-tempered adventures in this latest rhyming romp in the Bad Apple series.

This is Apple. He’s not a normal, nice kind of apple. Not a peaceful piece of fruit, no siree. He’s rotten to the core. And this Bad Apple is back and grumpier than ever after his run-in with Snake, who nearly ate him whole. In this latest adventure, it’s up to Granny Smith and her posse of golden apples to step in to teach Bad Apple a lesson. But he stoops to a new low and seals them up in a delicious apple crumble.

In this irreverent book by award-winning author Huw Lewis Jones, a truly terrible piece of fruit is wreaking havoc far beyond the rim of the fruit bowl. Illustrated in a deadpan, painterly style by Ben Sanders, Apple Grumble is sure to entertain the entire family.

Lewis-Jones' sparingly narrated text has a certain appeal for those who appreciate dark wit. Sanders' minimalist illustrations are playful and expressive… Amusingly irreverent.

Huw Lewis Jones is a historian of exploration who travels in the Arctic and Antarctica each year as a polar guide. He was formerly a curator at the Scott Polar Research Institute, Cambridge, and the National Maritime Museum, London. His books include The Writer’s Map: An Atlas of Imaginary Lands, Explorers’ Sketchbooks: The Art of Discovery & Adventure, and The Sea Journal: Seafarers’ Sketchbooks.

Ben Sanders is an Australian illustrator and graphic designer based in Melbourne. He is the author and illustrator of My Book (Not Yours), I Could Wear That Hat!, and I’ve an Uncle Ivan. His clients include Monocle, The Wall Street Journal, Visa, and Cadbury, among others.