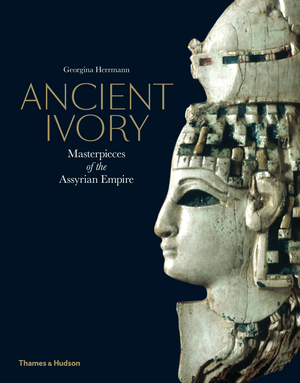 A beautiful and vital document of the ancient masterpieces of ivory from the Middle East, many of which have been lost or destroyed in the recent political turmoil of the region

Elephant ivory is a tactile, beautiful, and workable material. It can be made into many different forms and is the strongest material in the animal kingdom. It has been highly prized from the Paleolithic to the present day, and the impact on elephants has been severe—indeed, the Syrian elephant was hunted to extinction. Long ago, during the early first millennium bce—“The Age of Ivory”—literally thousands of carved ivories found their way to the Assyrian capital city of Kalhu, or modern Nimrud, in northern Iraq. The majority were not made there but arrived as gifts, tributes, or booty gathered by the Assyrian kings from the small neighboring states of the ancient Middle Eastern world, with the ivory itself probably sourced from the African elephant.

These ivories form a unique and unparalleled record of the art of the Middle East. Ancient Ivory documents these outstanding works and includes a general history of the art of ancient ivory, creating a resource of exquisite detail and exceptional importance, as so many works have been destroyed or lost in the sacking of the Iraq Museum as well as in the ongoing conflict and destruction of cultural heritage in the region.

Georgina Herrmann is honorary professor and emeritus reader in Near Eastern Studies at University College London, specializing in the ivories from the Assyrian capital Nimrud. For a decade she directed the archaeological excavations at Merv, Turkmenistan, a series of medieval settlements on the Silk Road now designated, as a result of her project, a UNESCO World Heritage Site.