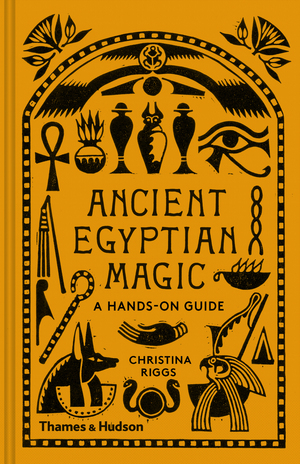 An entertaining and informative introduction to how ancient Egyptians practiced magic in their daily lives.

In the ancient world, if you needed a love charm, wanted to contact your dead wife, or needed the ability to fly like a bird, the magicians of Egypt were the ones who could make it happen. In Ancient Egyptian Magic, Christina Riggs explores how the Egyptians thought about magic, who performed it and why, and also helps readers understand why we’ve come to think of ancient Egypt in such a mystical way.

Readers will learn how to cure scorpion bites, discover why you might want to break the legs off your stuffed hippopotamus toy, and uncover whether mummies really can come back to life. Readers can also learn how to save a fortune on pregnancy tests—urinating on barley grains will answer that question— as well as how to use the next street parade to predict the future or ensure that an annoying neighbor gets his comeuppance.

Was magic harmless fun, heartfelt hope, or something darker? Featuring demons, dream interpreters, the Book of the Dead, and illustrations from tomb paintings and papyrus scrolls, Riggs breathes new life into ancient magic and uses early texts and images to illuminate the distinctions between magic, religion, and medicine.

Christina Riggs is Professor of the History of Visual Culture at Durham University and a Fellow of All Souls College, University of Oxford. She is the author of six books, including Ancient Egyptian Art and Architecture: A Very Short Introduction. She writes for a range of newspapers and magazines and has appeared in radio and TV shows for the BBC, National Geographic, and the History Channel.