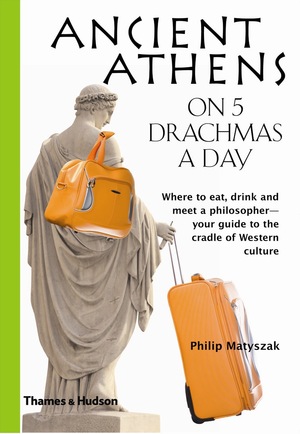 A time-traveler's guide to sightseeing, shopping, and survival in the city of gods and geniuses.

Welcome to Athens in 431 BC! This entertaining guide provides all the information a tourist needs for a journey back in time to ancient Athens at its pinnacle of greatness more than 2000 years ago. Travel via Thermopylae, the Oracle at Delphi, and the site of the epic Battle of Marathon to the city of Athena, goddess of wisdom. Meet Socrates, Thucydides, Phidias, and others who are among the greatest philosophers, writers, and artists who ever lived. Encounter ordinary Athenians in the marketplace and at the theater and learn the true character of one of the most extraordinary cities of any age.

Of course, ancient Athens was not all art, intellect, and politics. This well-researched yet irreverently unacademic guide also plunges gleefully into the hedonistic side of Athenian life with wine-sodden symposiums, brothels, and brawls, advising the reader to avoid slatternly prostitutes and inns where the beds are infested with bugs, and warning that both torches and an escort are needed to avoid muggers after an evening on the town.

Ancient Athens on 5 Drachmas a Day takes you through the raucous city crowds to the serene heights of the Parthenon and evokes the wonder of a city where the monuments and ideas that form the bedrock of Western culture are as fresh and new as the garlands of flowers on Athena’s altar.

Matyszak has created a comprehensive - and deliciously hilarious - travel guide.