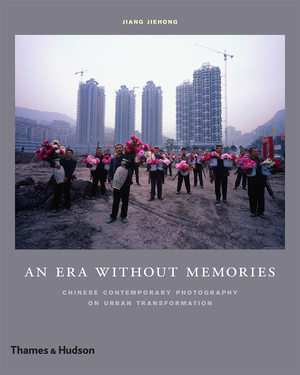 This timely book documents the phenomenon of rapid and transformative urbanization in China through the work of thirty-one of the country’s most talented art photographers. Capturing both the remnants of widespread demolition and constant, massive new development, these insiders have captured the new Chinese reality—an “era without memories”—brought on by the expansive urban transformation.

In four thematic chapters, An Era Without Memories offers a varied and thought-provoking kaleidoscope of imagery depicting every aspect of urban living, from juxtapositions of old and new to still-life pockets of roadside greenery to digital renderings of closely packed high-rises. These include Miao Xiaochun’s photograph of a vast glass building rising ominously from behind a traditional neighborhood; Wang Jinsong’s collages of the Chinese character used to mark condemned buildings; Zhang Peili’s shots of pastiche Western architecture; Xu Zhengqin’s billboards showing dream residential and commercial developments; and Wang Chuan’s poetic images of abandoned, half-finished, modern buildings.

Complete with an introduction by Stephan Feuchtwang, an expert on China and Professor of Anthropology at the London School of Economics, and a personal afterword by author Jiang Jiehong, this remarkable book offers a moving portrait of the dramatically changing Chinese landscape.

Professor Jiang Jiehong is a researcher, writer, and curator. He is the founding director of the Centre for Chinese Visual Arts at Birmingham City University, where he is also head of research at the School of Art. He is the principal editor of the Journal of Contemporary Chinese Art.