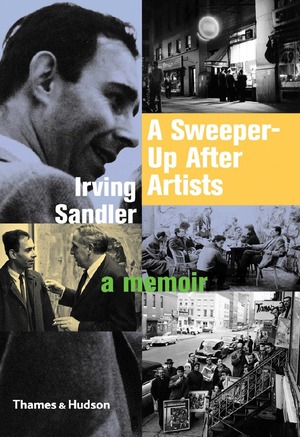 "A fine, firsthand appreciation of the accomplishments, antagonisms, foibles, and failings of the hosts that made the scene that Sandler has spent his life chronicling and celebrating." —Artforum

For over fifty years Irving Sandler has been a vital presence in the New York art world. Frank O'Hara called him, in a memorable poem, "the balayeur des artistes," the sweeper-up after artists. He has been a friend or acquaintance of virtually every important American artist of the postwar period, and his art criticism and books constitute the first and most comprehensive critical and historical account of this extraordinary period. His personal chronicle is the living memory of the New York art world, from abstract expressionism to the present day.

With candor, elegance, and humor, Sandler beautifully relives in this book what the art world has meant to him over the five decades that he has spent as an on-the-scene scribe.

Sandler gives the reader a real feel for a milieu where art was talked about incessantly, where existential angst and tragic aspirations were almost givens…A tale told with humor, passion and grace.

The most informed observer. Our Boswell of the New York scene.

Irving Sandler‘s four-volume history of postwar American art includes The Triumph of American Painting, The New York School, American Art of the 1960s, and Art of the Postmodern Era. He was the manager of The Club of the abstract expressionists and co-founder of Artists Space. He is the chairman of the Artists Advisory Committee of the Marie Walsh Sharpe Art Foundation. In 2008, he received a Lifetime Achievement Award in Art Criticism from the International Art Critics Association.