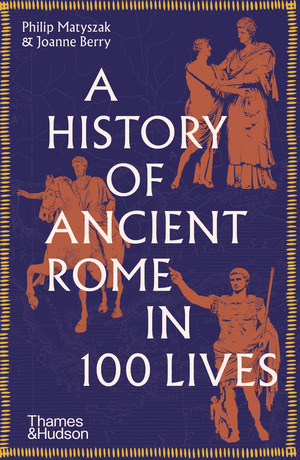 A vibrant portrait of a lost world, A History of Ancient Rome in 100 Lives reveals the mightiest civilization of antiquity through the eyes of one hundred of its citizens. The book gives a voice not just to Rome’s most famous generals and rulers, such as Caesar and Caligula, but also to its builders, sculptors, poets, historians, gladiators, shepherds, enslaved people, and courtesans. The book begins with Faustulus, the fosterfather of Romulus and Remus, and closes with the final emperor, Romulus Augustulus. The stories of Roman women are given their due as well—from Servilia, Caesar’s lover; to Agrippina, the murderous wife of Claudius; Amazonia, the sword-swinging gladiator; and Hypatia, philosopher, astronomer, and mathematician. Exploring every level of society and using the latest archaeological evidence as well as ancient texts, the authors build up a picture of what it meant to live in Ancient Rome.

Joanne Berry is a Roman historian and archaeologist and associate professor of classics at Swansea University. She is the author or coauthor of many books, including The Complete Pompeii and The Complete Roman Legions.