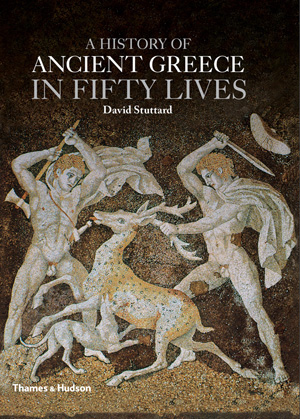 The political leaders, writers, artists, and philosophers of ancient Greece turned a small group of city states into a pan-Mediterranean civilization, whose legacy can be found everywhere today. But who were these people, what do we know of their lives, and how did they interact with one another?

In this original new approach to telling the Greek story, David Stuttard weaves together the lives of the movers and shakers of the Greek world into a continuous narrative, from the early tyrant rulers Peisistratus and Polycrates, through the stirrings of democracy under Cleisthenes to the rise of Macedon under Philip II and Alexander the Great and the eventual decline of the Greek world as Rome rose. Moving from Sicily to Afghanistan, and from Macedonia to Alexandria; delving into the worlds of mathematics and geography, rhetoric and historiography, painting and sculpture; exploring the accounts of historians and mystics, poets and dramatists, political commentators and philosophers, this book creates a vivid picture of life in all arenas of the ancient Greek world. As well as the most famous politicians and writers, in these pages the reader will meet less well-known figures such as Milo, the Olympic wrestler who led his home town in a time of crisis; Aspasia, the brilliant female intellectual, who taught rhetoric to Socrates; and Epaminondas, the Theban who taught tactics to Philip of Macedon and so destroyed his own city.

This biographical approach represents an interesting way to tell the history of ancient Greece. …Filled with beautiful illustrations and photographs, many in color…Recommended.

The real power of the book is the author's ability to convey the context of the subjects' lives and the interconnected effect of their actions on their society and one another. A highly enjoyable and accessible volume. For readers new to Greek history, it provides an excellent overview of significant events and personages, while those familiar with its subjects might find that the presentation results in an interesting perspective.

David Stuttard is the author of many books on classical antiquity, including Greek Mythology: A Traveler’s Guide from Mount Olympus to Troy, The Romans Who Shaped Britain, and the recent Nemesis: Alcibiades and the Fall of Athens.