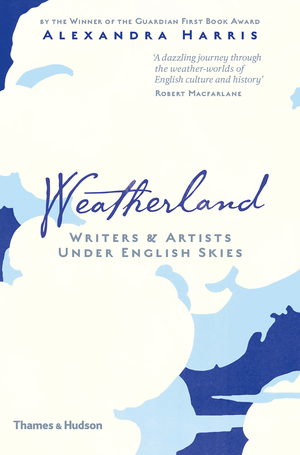 In a sweeping panorama, Weatherland allows us to witness England’s cultural climates across the centuries. Before the Norman Conquest, Anglo-Saxons living in a wintry world wrote about the coldness of exile or the shelters they had to defend against enemies outside. The Middle Ages brought the warmth of spring; the new lyrics were sung in praise of blossoms and cuckoos. Descriptions of a rainy night are rare before 1700, but by the end of the eighteenth century the Romantics had adopted the squall as a fit subject for their most probing thoughts.

The weather is vast and yet we experience it intimately, and Alexandra Harris builds her remarkable story from small evocative details. There is the drawing of a twelfth-century man in February, warming bare toes by the fire. There is the tiny glass left behind from the Frost Fair of 1684, and the Sunspan house in Angmering that embodies the bright ambitions of the 1930s. Harris catches the distinct voices of compelling individuals. “Bloody cold,” says Jonathan Swift in the “slobbery” January of 1713. Percy Shelley wants to become a cloud and John Ruskin wants to bottle one. Weatherland is a celebration of English air and a life story of those who have lived in it.

[An] edifying and rigorous tour of English literature and painting in terms of its depiction of weather. [Harris] is a brilliant guide and makes a persuasive case for examining how art looks at the skies. With her keen eye for detail and astonishing ability to trace connections, Harris will change how readers view their relationships to art and the world around them. The sumptuous reproductions of artworks are worth the price of admission all by themselves.

My thinking about people and weather has been inspired from the first by Virginia Woolf,” writes Harris, whose Romantic Moderns won the Guardian First Book Award in 2010. In Weatherland, Harris captures the moods and influence of weather from Roman Britain to today's climate change in lyrical prose that slides easily from historic moments to 21st Century insights. She gives us Tacitus, writing “the climate is foul, with frequent rains and mists,” and Beowulf's “wild weather”. She traces the influence and revelations of weather through the work of artists and writers like Daniel Defoe, “cataloguer of the storm-strewn world”, who wrote his first book about a devastating 1703 hurricane, and Charlotte Bront\xc3\x83\xc2\xab, who “breathed the lightning of Wuthering Heights with a sense of awe”. Weatherland is swift moving and brilliantly written.

Fascinating… An ambitious, sweeping survey of British art and literature as seen through the lens of clouds, skies, sunshine and drizzle. Carrying her immense knowledge lightly, never emerging as didactic or pedantic, [Alexandra Harris] takes us across sodden fields and frosty meadows, through thick mist—and into the English mind. Harris collects examples everywhere—from plays and architecture, from poems and elegies and paintings, but also from diaries and letters. She's a nonpareil guide and Weatherland is a great achievement, wide-ranging but not confusing, packed with details yet clearly focused [and] with more than 60 well-integrated illustrations the book is also beautifully produced.