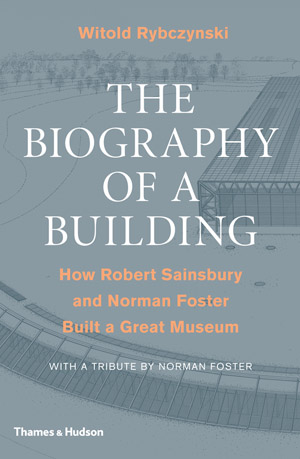 How Robert Sainsbury and Norman Foster built a great museum.

Witold Rybczynski is an architectural writer with a superlative style, a uniquely humanistic approach to his subject, and an enormous reputation. The Sainsbury Centre for Visual Arts at the University of East Anglia was Norman Foster’s first major commission and the project that set him on the road to fame and fortune. It remains highly regarded in the architectural world.

This is a remarkable book about a remarkable building. We learn how a major museum is conceived and developed, the role of the sponsor, the nature of collecting, and the experiences of the people who occupy the space. Rybczynski succeeds in telling the whole story of the Sainsbury Centre and the multiple impulses and inspirations that brought it into being.

[The artist's] latest….about the Norman Foster-designed Sainsbury Center in England.

Witold Rybczynski was born in Edinburgh, raised in London, and attended schools in England and Canada. He studied architecture at McGill University, where he also taught for twenty years. He is currently the Martin and Margy Meyerson Professor of Urbanism at the University of Pennsylvania.