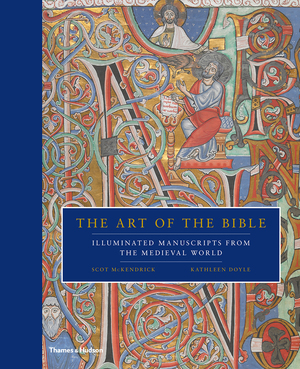 A beautiful and informative exploration of the illuminated manuscripts of the Bible over a millennium and across the globe, shedding new light on some of the most significant, yet rarely seen, paintings of the Middle Ages

For two millennia the Bible has inspired the creation of extraordinary art. Within this history illuminated biblical manuscripts are among the best tools for understanding early Christian painting and artistic interpretations of the Bible.

This extensively illustrated new book, compiled and written by two internationally renowned experts, transports readers, by way of forty-five featured manuscripts, across the globe and through 1,000 years of history. Passing chronologically through many of the major centers of the Christian world, from Constantinople and imperial Aachen to Canterbury, Mozarabic Spain, Crusader Jerusalem, northern Iraq, Paris, London, Bologna, and Rome, Scot McKendrick and Kathleen Doyle shed light on some of the finest but least-known paintings from the Middle Ages, and on the development of art, literature, and civilization as we know it.

Dr. Scot McKendrick is the head of Western Heritage Collections at the British Library. His publications include Codex Sinaiticus: New Perspective on the Ancient Biblical Manuscript and Illuminating the Renaissance.

Dr. Kathleen Doyle is the lead curator of illuminated manuscripts at the British Library.