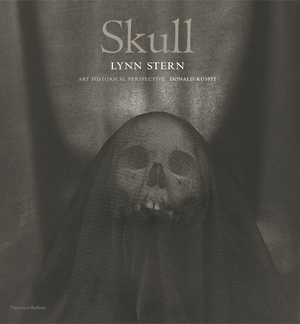 A collection of mesmerizing photographs from contemporary photographer Lynn Stern, including eight series on skulls

For the last twenty- five years Lynn Stern has been photographing skulls, both human and animal, some clearly recognizable and some highly abstract. Skull presents the resulting eight series— several of which have never been seen and some notpreviously seen in their entirety.

Stern’s images often include the symbolic form of the circle, alluding to both the emptiness of infinity as well as the possibility of oneness. Formally distinct yet overlapping thematically, these series offer a powerful exploration of the idea of death. Unlike many photographers, Stern has no interest in representing people, places, or things, aiming instead to “de-literalize whatever I photograph.”

The extended accompanying essay by renowned art critic Donald Kuspit contextualizes Stern’s work within art history through comparisons with paintings, sculptures, and photographs made during the last seven centuries of western art.

Skull contains nearly 150 tritone and quadratone reproductions of Stern’s photographs, as well as forty color illustrations of other artists’ work.

The omnipotence of death, not the omnipotence of the artist is Stern's theme. While photographing, Stern's conscious concerns were formal; however, those concerns yielded emotion-\xc3\x82\xc2\xadfraught images, and she admits that she is still striving to accept death, which for her, is changeable and dynamic. Kuspit's inclusion of art from Renaissance to contemporary times provides a firm ground on which to consider Stern's photographs. [A] perfect starting point for a multidisciplinary discussion or course on photography, philosophy, art history, and comparative religion.

Lynn Stern‘s work has been exhibited around the world, and is in numerous public collections. She has previously published five monographs.

Donald Kuspit is Distinguished Professor Emeritus of Art History and Philosophy at the State University of New York at Stony Brook and has been the A.D. White Professor at Large at Cornell University. He has authored over a dozen books and more than nine hundred articles.