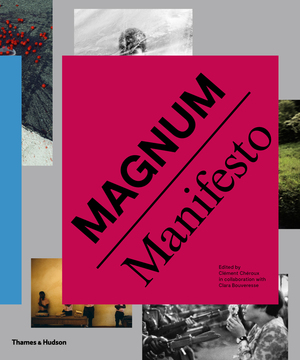 The official publication celebrating Magnum Photos’ 70th anniversary with a fresh and insightful view of Magnum’s history and archive, accompanying a landmark exhibition showing in New York at the International Center of Photography in 2017 before touring worldwide

In this landmark photography publication and accompanying exhibition celebrating the 70th anniversary of the renowned photo agency, Clément Chéroux and Clara Bouveresse demonstrate how Magnum Photos owes its preeminence to the ability of its photographers to encompass and navigate the points between photography as art object and photography as documentary evidence.

Magnum Manifesto is organized into three parts: Part 1, Human Rights and Wrongs (1947-1968), views the Magnum archive through a humanist lens, focusing on postwar ideals of commonality and utopianism. Part 2, An Inventory of Differences (1969-1989), shows a world fragmenting, with a focus on subcultures, minorities, and outsiders. Part 3, Stories About Endings (1990-present day), charts the ways in which Magnum photographers have captured—and continue to capture—a world in flux and under threat.

Featuring both group and individual projects, this volume includes magazine spreads, newspaper features, and letters, putting some of the world’s most recognizable images in creative context. Magnum Manifesto is an expertly curated, essential collection of images and commentary.

Magnum Manifesto collects more than 500 images made by the collective's members. It also presents documents pulled from its archives, dating from the collective's founding to the present. The project celebrates the images that have embodied its mission and reveals that the collective has struggled with how to proceed right from the start. The photographs are organized chronologically and grouped into sections that correspond roughly to themes: human rights, identity, and political change. The documents reproduced in the book include the company's 1947 Certificate of Incorporation, which states that the agency's purpose is, among other tasks…"to carry on the business of photography."

A feast of trenchant, often-wrenching imagery drawn from the organization's vast archives.

Clément Chéroux is a historian of photography and the Head Curator of Photographs at the Centre Pompidou, Paris.

Clément Chéroux is a French photography historian and curator. He is chief curator of photography at the Museum of Modern Art in New York City.

Clara Bouveresse is a photography historian with a PhD in art history from Paris 1 Panthéon-Sorbonne University.

Clara Bouveresse is a photography historian with a PhD in art history from Paris 1 Panthéon-Sorbonne University.