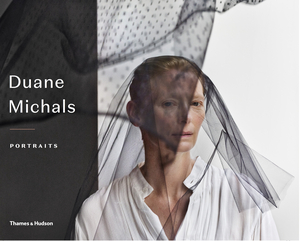 A dazzling collection of Duane Michals’ portrait photography, featuring never-before-published images of some of the greatest actors, musicians, artists, and writers of the past fifty years

Duane Michals: Portraits presents for the first time a comprehensive overview of more than a half-century of portrait photographs—many of iconic cultural figures—by one of our era’s most influential and entertaining artists.

Duane Michals, the subject of a major retrospective exhibition organized by the Carnegie Museums in 2014 and scheduled to travel in 2018, has long been recognized for his inventive photo sequences, which shaped the work of several generations of artists. But even as he enjoys wide acclaim, a central body of work by the eighty-five-year-old artist remains little known.

For decades, Michals was a sought-after editorial photographer for leading magazines, portraying outstanding creative personalities of our era. This comprehensive selection of his inventive portraits—many not previously published in book form—accompanied by Michals’ inimitable, sometimes hilarious observations and reminiscences, will delight his fans and engage new admirers. The book features intimate and illuminating images of musical performers such as Barbra Streisand and Johnny Cash; actors from Dustin Hoffman and Robin Williams to Tilda Swinton; contemporary artists including Andy Warhol, David Hockney, and Jasper Johns; authors such as Norman Mailer and John Cheever; and “old masters” of modern art including René Magritte and Balthus.

Perhaps best known for his visual storytelling sequences, Michals also worked as a free lance photographer for culture and fashion magazines. Through assignments for these publications, he created intimate, carefully composed portraits of America's best-loved visual artists, performers, writers, and influencers, including Andy Warhol, Tilda Swinton, Buster Keaton, Maya Angelou, and even Donald Trump. The black-and-white photos, including a few family and self-portraits, demonstrate his commitment to fine craftsmanship as well as his artistic sense of subtle humor. Michals's work is pure delight for both commercial photographers and fine artists. Because the book also acts as a time capsule of late-20th-century American art and culture, pop culture historians and those nostalgic for bygone decades will enjoy this compilation.

Duane Michals is an American photographer.