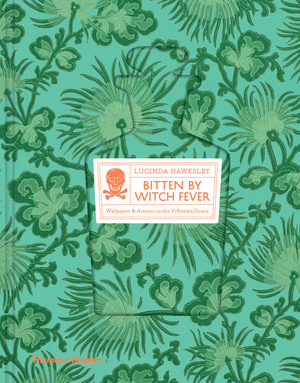 The shocking story of a deadly trend in Victorian wallpaper design, illustrated by beautiful and previously unseen arsenic-riddled designs from the British National Archives

In Germany, in 1814, Wilhelm Sattler created an extremely toxic arsenic and verdigris compound pigment, Schweinfurt green–known also as Paris, Vienna, or emerald green–which became an instant favorite amongst designers and manufacturers the world over, thanks to its versatility in creating enduring yellows, vivid greens, and brilliant blues. Most insidiously, the arsenic-laced pigment made its way into intricately patterned, brightly colored wallpapers and from there, as they became increasingly in vogue, into the Victorian home. As its use became widespread, commercial arsenic mines increased production to meet the near-insatiable demand. Not least of which was the UK’s largest mining plant, DGC whose owner was William Morris, originator of the British Arts and Crafts movement and arguably the finest wallpaper designer of his generation.

Bitten by Witch Fever (Morris’s own phrase to dismiss arsenic- and- wall-paper-related public health concerns in 1885) tells this fatal story of Victorian home décor, building upon new research conducted especially for this book by the British National Archive, on their own samples. Spliced between the sections of text are stunning facsimiles of the wallpapers themselves.

Replicates the papers' hues and texture, with meticulous color-matching and heavyweight stock, interspersing color-themed sections with booklets that relate the history and uses of the poison.

Tells the story of the extensive use of arsenic in the 19th century [and] includes pictures of objects and artworks made from substances that incorporated arsenic, and advertisements for arsenic-filled products for Victorian women, such as soap with a doctor's certificate to ensure its harmlessness.

An unnerving account of an unexpected killer in the elaborately decorated homes of Victorian England: arsenic-laced wallpaper…The book's gorgeous wallpaper facsimiles give no hint of their toxicity; they beautifully evoke Victorian style with their ornate patterns and rich, vivid colors, illustrating why these papers, and specifically their green shades, were so popular.

Lucinda Dickens Hawksley is the author of three biographies of Victorian artists: Lizzie Siddal, Kate Perugini (née Dickens), and Princess Louise. Lucinda is a regular lecturer at the National Portrait Gallery in London.